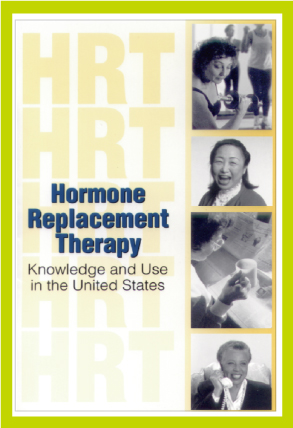 While much has been written about the risks and benefits of hormone replacement therapy (HRT), there is much less docu- mentation of its actual use in the U.S.
This chartbook offers researchers, health- care professionals, and policy makers an inventory of information available about HRT use from recent nationally represen- tative data collected by NCHS. The topics include:

Each of the NCHS surveys used include different information regarding HRT usage. Thus, the content of the survey dic- tated which data source to use to address a particular question. Because one of the surveys used collected data periodically rather than annually, use of the most recent data for each question did not result in answers that all came from the same time period.

This chartbook is not intended to be a guide on whether or not to use HRT, since that decision must be made by each indi- vidual women with help from her phy- sician. However, this overview of HRT prescription and use in the United States will be helpful to researchers and policy makers working in the arena of women’s health.

A Brief History of HRT Use

The decrease in estrogen levels in women going through menopause has interested doctors and patients for many years. Syn- thetic estrogen was developed in the 1920’s, and by the mid-1930’s it was being used to relieve menopausal symptoms. In the mid-1960’s, the book Feminine Forevertouted the use of synthetic estrogen as a way to maintain youth and femininity. This book became a hit in the lay press and greatly increased the demand for HRT.

HRTusedecreasedsharplywhenthecon- nectionbetweenuseofsyntheticestrogen andelevatedriskofendometrialcancerwas recognized in the 1970’s. Use of HRT has slowly gone up since the 1980’s, when long-term research established the protec- tive effects of HRT against osteoporosis and possibly heart disease.

Improved treatment schedules and delivery systems have increased HRT use in the U.S. To minimize the risk of endometrial cancer, physicians are much more likely to give lower doses of estrogen and to com- bine it with progesterone for women whose uteruses are intact. Furthermore, many dif- ferent formulations and dosing schedules now permit physicians to better tailor HRT to each patient.

Although we know much more about HRT today, controversy still surround its risks and benefits. Those who caution against using HRT use often cite the increased risk of endometrial and breast cancer associated with using estrogen, especially for extended lengths of time, and its common side effects such as breast tenderness, nausea, unpredictable bleeding, bloating, and mood fluctuations. Those who advocate using HRT frequently point out that HRT appears not only to alleviate menopausal symptoms, but also to reduce the risk of osteoporosis, and possibly heart disease and Alzheimer’s disease, all of which could have much greater impact than cancers on the health of postmenopausal women.

Questions about Coronavirus for Kids

The Relationship Between Estrogen Levels, Use of Hormone Replacement Therapy,...
Scroll to top